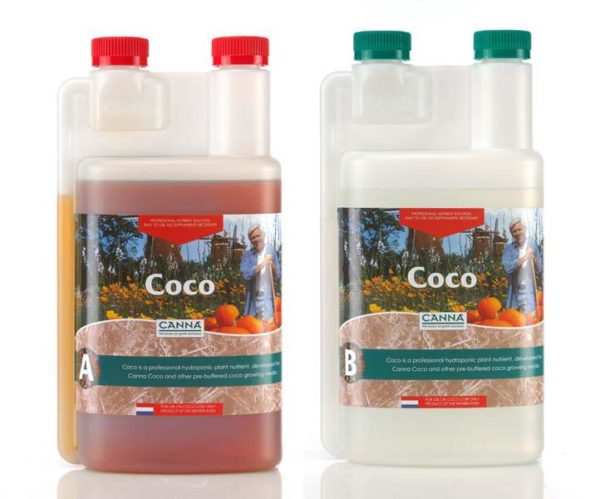 Coco is a complete professional nutrient for plants containing all the essential elements for optimal growing and flowering.

Due to the special characteristics of coco substrate CANNA COCO nutrients don’t have a Vega and Flores version, there is one unique formulation for both the growth and blooming phase. We can’t make things easier! CANNA COCO is easy to use, dissolves directly and is extremely suitable for “drain-to-waste” cultivation in buffered coco medium.

After years of research into potting mixes, drainage and leaf analysis, CANNA has succeeded in being the first to develop a fertilizer that is specifically tailored to the characteristics of coco substrates. CANNA COCO nutrient is composed of high value minerals. Growers throughout the world have been enthusiastic for years about the explosive growth and profuse flowering with CANNA COCO.

CANNA COCO nutrient consists of two parts, an A part and a B part. We separate these parts for a reason. The amounts of Calcium and Phosphate that have to be present for the nutrient to do its job properly are quite high. When you put such highly concentrated elements in one bottle they will conflict with each other sometimes resulting in a slimy residue. When you separate these two elements from each other, then mix both of them with the water in your nutrient reservoir later on,there is no problem. That’s why you should first add the A component and then the B component!

Now in Stock – Advanced Nutrients in Eugene!posted by Makayla