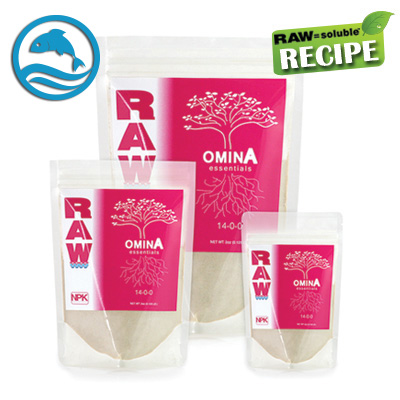 RAW ominA (essential) is a naturally available source of 14% vegan Nitrogen derived from plant protein hydrolysate. ominA is easily absorbed producing a dramatic effect on calcium uptake by the roots! It is completely water Soluble and will not clog pumps or irrigation lines. Use RAW ominA in conjunction with nutrients and supplements throughout all stages of growth and bloom. It is a beneficial supplement to all feeding schedules. Works in conjunction with all nutrient and feeding programs.

Especially amino acid blends rich in the primary chelators- glutamic acid and glycine. In nature, as in hydroponics, calcium tends to react with phosphates and sulphates, precipitating out of solution as “lime scale”. Lime scale makes calcium unavailable to the plant. Over time, lime scale can also form calcium deposits that clog up pumps and irrigation lines, a constant concern of hydroponic growers. Amino acid chelators, on the other hand, attach to calcium ions like a claw, preventing them from reacting with other minerals to form lime scale. At the same time, glutamic acid and glycine stimulate root cells to open up calcium ion channels, allowing plants to take up calcium ions thousands to millions of time faster than simple osmosis!